The link between genetics and breast cancer

Genetic factors in breast cancer play a smaller role than you might have thought, but forewarned is forearmed, especially if there is a history of this disease in your family. Find out how your genes may be linked to breast cancer. 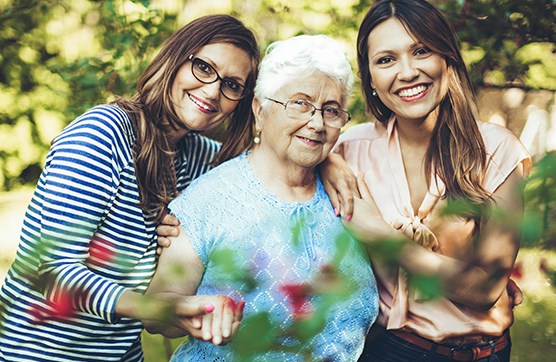 Your body is a work of art: chromosomes in every cell contain genes that hold information about its structure and functions. So when an abnormality occurs, a gene may provide instructions that could result in faulty cell growth.

Genes are passed from parents to children, so it is possible to inherit gene mutations that increase the risk of developing cancer. But these germline mutations, as they are known, account for only five to 10% of all breast cancer cases. By far the majority of breast cancers are acquired, not inherited, sometimes for no clear reason and sometimes through exposure to radiation, environmental toxins or viruses.

Which genes are linked to breast cancer?

The genes most closely associated with breast cancer are BRCA1 and BRCA2. ‘All human beings have these genes. Their job is to produce tumour suppressor proteins that help repair damaged DNA, and so play a role in ensuring the stability of the cell’s genetic material,’ explains Dr Yastira Ramdas, an oncologist at Life The Glynnwood. ‘Abnormalities may occur in one or both genes. When either is mutated or altered, such that its protein product either is not made or does not function correctly, DNA damage may not be repaired properly. As a result, cells are more likely to develop additional genetic alterations that can lead to cancer.’

BRCA1 and BRCA2 are similar, and the risk of mutation is the same for both, she says, but the type of breast cancer that develops and the way tumours respond to treatment may be different. Mutations of these two genes account for 20–25% of all hereditary breast cancer cases. Less common genes that have also been associated with an increased risk of developing breast and other cancers include mutations in the TP53, PTEN, CDH1, ATM, CHEK2 or PALB2 tumour suppression genes, many of which can be detected in a single, multiple-gene panel blood test.

Who is at risk?

A family history of breast or ovarian cancer (from the father’s or mother’s side) could be indicative of a hereditary condition, particularly if a close relative was diagnosed under age 50. ‘If genetic testing reveals that either parent has the BRCA1 or BRCA2 mutation, you have a 50% chance of having it too,’ says Dr Ramdas.

In men, the BRCA2 mutation is more common. ‘Men can get breast cancer, but it’s rare,’ says oncologist Dr Leiyah Bassa based at Life The Glynnwood. ‘In Tanzania and areas of central Africa it accounts for about six percent of cancers in men and in the UK and US it represents between 0.5% and one percent of all diagnosed cancers. Of those men who do get it, 15–20% have a family history of the disease.’

How is it tested?

Testing for BRCA1/2 mutations is done via a blood test or analysis of cheek cells. Interpreting results is complicated: depending on your family history, a negative result could indicate you don’t have a BRCA mutation but this does not entirely rule out a hereditary risk for cancer as there are many mutations that testing cannot detect. A ‘true negative’ means that a mutation present in one or more of your family members has not been found in you.

A positive result with ‘unknown significance’ means that a mutation has been found, but there’s some doubt about whether it increases your risk of developing breast or ovarian cancer. But a positive for a BRCA1 or BRCA2 mutation indicates a lifetime breast cancer risk of 55–85% for a BRCA1 mutation, and 50–85% for BRCA2. The lifetime risk of ovarian cancer is 35–46% for BRCA1 and 13–23% for BRCA2.

Women who have abnormalities in either gene are also at increased risk of developing colon and pancreatic cancers, as well as melanoma.

What can you do?

‘It’s a radical choice to have healthy breasts removed, but ‘it’s recommended that BRCA carriers be offered prophylactic bilateral mastectomies as this can decrease the incidence by as much as 90% or more in patients at risk of hereditary breast cancer,’ says Dr Bassa. ‘Removing the ovaries and fallopian tubes (bilateral salpingo-oophorectomies) is also considered risk-reducing surgery, once child-bearing is complete. The decision to undergo such surgery is a personal preference, but should be accompanied by counselling as libido, sexual functioning and body image may be affected. It’s important to note that surgery does not completely eliminate the risk of developing cancer.’

Regular screening is obviously advised and, for women who choose not to have bilateral mastectomies, there’s the (less effective) option of taking the drug tamoxifen as a form of chemo-prevention.

Dr Yastira Ramdas is a qualified clinical oncologist, based at Life The Glynnwood. She has been practising for more than two years in the greater Joburg area. She’s living her dream by helping those in need, and her passion in life is to heal and bring dignity to all her patients.

Dr Leiyah Bassa is a clinical oncologist at Life Roseacres Hospital as well as at Life The Glynnwood in Gauteng. She is a member of the South African Oncology Consortium and the Oncology Advisory Committee: Council for Medical Schemes.