Seeing the world from mountain tops 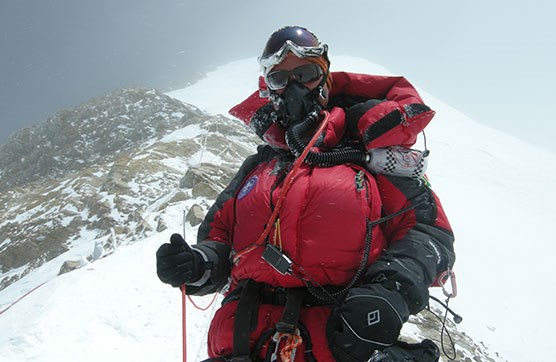 Adventurer and bucket-list motivational speaker, Robby Kojetin proves that even a serious medical setback cannot get in the way of fulfilling a life-long dream.

From the age of 15, energetic Germiston advertising creative and motivational speaker Robby Kojetin had one dream: to climb Everest. ‘I saw that classic brooding photo of Tenzing Norgay at the summit against an inky sky and that was it!’

In 2000, with a graphic design qualification behind him, Robby and his best friend John Black, together with four others, set themselves the challenge of climbing the three highest peaks in Africa in just one month. They started with beautiful Margherita Peak in Uganda, ‘source of the Nile and filming site of Gorillas in the Mist’, but the weather beat them back. Then they adventured by taxi to Tanzania, where they triumphantly summited gruelling Kilimanjaro, before attempting Mount Kenya. ‘But we were exhausted and didn’t make the top.’

Undaunted, the group gave themselves another project: over the next few years they would do the Seven Summits – the highest peaks on the world’s seven continents. They soon ticked off South America’s Aconcagua (‘we hired muleteers, it was awesome’) and had done Mount Elbrus in Russia (‘highest mountain in Europe, hectic’) when fate struck in the last place Robby would have expected.

During a routine training session at Wits University in April 2006, Robby slipped on the climbing wall and fell three metres. ‘I hit a split in the foam and landed on my toes – like Spider-Man in his crouch. I heard a crunch, like a mouthful of fresh popcorn…’

The impact of the fall had forced his toes inwards and backwards. ‘I fractured both sides of both ankles and ruptured almost every tendon from my shins down.’

In agony, Robby was sped to Life Roseacres Hospital. The following morning surgeons opened his ankles and placed two screws in each to mend what they termed ‘bilateral medial malleolus fractures’. ‘They attached the broken segments of bone together, plus a plate with five screws on the outer ankle of my left foot to secure the end of the fibula back to the main body of the bone,’ he explains. ‘The site was closed with 32 steel staples.’

In a wheelchair, Robby went home and restlessly waited to recover … and waited ... and waited. When the excruciating pain persisted four months later, even after the plate and screws were removed in a second operation, the doctors ordered 3D scans.

These revealed something initial X-rays had not: Robby had also broken the talus bones of both ankles. A third surgery was scheduled: ‘It included having to saw off a part of my tibial malleolus (the bone that sticks out on your inner ankle) and separate my foot from my tibia and fibula, to be able to access and repair the talus bones. It required using a bespoke clamp to create a gap big enough to work in, and applying a cement paste containing human donor bone tissue.’

The worst of the physical pain then subsided, but the mental pain deepened as, assisted by physiotherapists, Robby began slowly learning to walk again. ‘A large part of my identity and self-confidence had been defined by how I felt while climbing,’ he says. ‘It gave my life meaning. Now my dreams of seeing the world from mountaintops were no longer within my reach. “That guy who climbs mountains” had become “that guy in the wheelchair”. A burden to those who loved and cared for me.’

On his ‘darkest night of the soul’, he contemplated overdosing on his morphine-based meds. But he resisted, and this was, he says, a turning point. ‘Over the days and weeks that followed, I came to terms with my lack of choices and found myself facing another pivotal decision: How am I going to handle this? “This” was not where I wanted to be. “This” needed to change.’

By then Robby had moved to Durban where his brother and sister-in-law could help care for him. He had a series of further surgeries, this time at Life Entabeni Hospital, during which doctors removed scar tissue and bone fragments and smoothed bone surfaces to improve mobility. And he resumed physiotherapy, this time with Life Entabeni Hospital’s Kay Morley.

It’s easy to treat well-motivated athletic patients, Morley says: ‘They’re always very co-operative. I thought Robby’s prognosis would be good, as he did everything he was told. And I would always expect my patients to at least be able to walk again. But he was exceptional, because he did a little bit more than that!’

As Robby improved, he found a job as a creative director for an ad agency. When his friends began researching joining a commercial expedition to climb Everest, he experienced ‘a wild mixture of hope and despair’. All that stood in his way were ‘two useless ankles and finding three quarters of a million rand – the cost of the trip’. Funding was the easier part, and he found sponsors by climbing for cancer, as his mom had survived breast cancer. He billed it The Climb of Hope, a chance to ‘climb high for those who can’t’.

The trek to Everest Base Camp was long and arduous, and the ascent of the mountain itself, slow and agonising – especially after Robby twisted an ankle, aggravating his already inflamed joints. ‘But icing the injury was as easy as just putting my bare foot on the floor of the tent while lying on my mattress!’ He used compression bandages to contain swelling and provide extra support, ‘and a lot of painkillers! I walked with two hiking sticks wherever possible, but up high you can only use one ice axe, because your other hand is used to pull up on the fixed safety lines.’

At 9:21am on 23 May 2009, 56 days after leaving home, Robby reached the highest point on the planet in heavy mist. ‘I spent 22 minutes there. In reality the scene was far from the moment I’d painted in my head. There’s no way to imagine the searing cold or how isolated and exposed I felt, and there was no panoramic view to speak of.’

Sheer exhaustion initially dulled his triumph. It was only at the airport in Johannesburg as he arrived home that it finally struck him that, ‘yes, my success did mean something! I had been given the opportunity to live the dream of a lifetime. Now I had the responsibility to use all I’d gained to make a positive difference in the lives of others.’

Robby began by giving motivational talks. Then, inspired by the 2007 movie of that name, he worked on the concept of ‘The Bucket List’ as the best way to help people. ‘My take on it is not just a list of things to do before you die,’ he explains. ‘It’s a way to really start living.’

With ‘Climb Everest’ ticked off the top of his list, he added other goals. To date, on the strength of his list, he has led two trekking expeditions back to Everest Base Camp, climbed to the summit of Kili nine times, climbed five of the Seven Summits, gone white-water rafting in the Andes and piranha fishing in the Amazon, and bungee jumped at Victoria Falls.

‘Out of everything I have learnt from this whirlwind life, the key thing is to never judge yourself by the size of your Everest – the obstacle, illness or injury you need to overcome; the goal you set yourself,’ he says passionately. ‘And no matter where the journey takes me, I’ll handle it the only way I know how. Left foot. Right foot.’

Find out more:
You can find out more about Robby at www.robbyspeaks.com, on Twitter or on Facebook.