Treatment after a five-storey fall

On 19 June 2016, 21-year-old Nicholas Stephenson, a third-year finance student, sustained a traumatic brain injury (TBI) after a five-storey fall. His mother, Jean Stephenson, describes the journey to reclaim their lives. 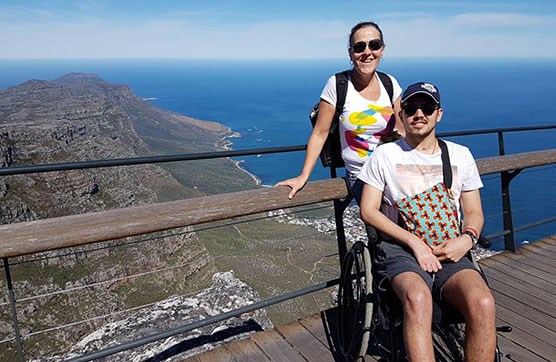 In the best possible hands

‘I received the call that every parent dreads at 3:30am that morning and rushed to the hospital, arriving just behind his ambulance. I had no idea, at the time, how blessed we were. Nicholas could have been taken to any hospital in the local area (in fact, there was a closer one), but because they found his medical aid card they deliberately chose Life Vincent Pallotti Hospital, which has one of the best neuro units in Africa.

Right from the start, I ran away from all the doctors’ tales of doom and left others to deal with them. I would not hear any details; I refused to hear the negatives and at that stage that was all they had. I understood Nicholas had suffered a traumatic brain injury (TBI) and that they had no idea whether he’d pull through. But I was his mother: I knew he would. I’d given him life once and I could give it to him again as I was convinced he was there.

I instructed that he was to be included and not spoken over, during each and every conversation. My job was to be with my son and I was committed to surrounding him with all the love and prayer in the world to enable him to heal himself. I also knew that with brain injury no one could predict the outcome, and firmly believed that there is always the possibility of miracles. It helped that he was in the best possible hands and place.

Nicholas spent one month in ICU – three weeks of it in a coma – before being moved to the hospital’s acute rehabilitation unit. Miraculously, despite the height of the fall, he had only sustained two cracked ribs, but the brain injury had taken its toll. It was extremely difficult to see my son, who had completed 10 subjects during matric and achieved nine distinctions, unable to communicate.

I clawed at every form of rehabilitation available, Western and complementary. He started acupuncture as soon as he was moved to the Life Rehabilitation Unit and his acupuncturist brought her dog to see him. He was taken outside, in his bed, to see the horses that live next to the hospital grounds and when Botox® was suggested, I agreed.

We initially started communicating with Nicholas through blinking, even though we had no idea whether he understood us. Later, we progressed to a ‘yes’ and ‘no’ board. The first time he spoke, about 10 weeks after the fall, I was so excited that I ran up and down the hospital, pushing his wheelchair, screaming at the top of my voice. We were in the cafeteria and I asked him a question. Since we didn’t have the board, he simply replied, and he’s been talking ever since. It was an amazing day for us all.

There’s no doubt that a huge part of his healing was the incredible medical team at Life Vincent Pallotti Hospital. Every single one of them – from his doctors to his therapists and nurses – contributed to his healing, as did all the treatments. The rehabilitation team believes the support and love our family and friends showered on him played a major role too.

We know the next two years are critical in getting him back to where he was and finishing his degree, so we’re totally focused on using every single available form of rehab to give him the best possible chance. It’s time- and incredibly money-consuming but we have no choice: Life Vincent Pallotti Hospital gave him the best possible start; we’re doing everything we can to ensure he gets there.

Looking back now I can honestly say that miracles do happen. There is still a long road ahead but Nicholas has made a dramatic recovery. The doctors cannot believe that the Nicholas today is the same Nicholas they saw on his first two CT scans.’

In his rehabilitation therapist’s words

Rehabilitation for traumatic brain injury (TBI) is multifaceted and requires the input of an interdisciplinary team, says Elmarie du Preez, a physiotherapist who was on Nicholas’s team. ‘As a result of his TBI, he suffered from spasticity in his right arm and leg. In our rehabilitation centre, we are successfully treating this condition, which can interfere with mobility and daily living activities, with Botulinum Toxin (Botox®) therapy.

‘Botox® is a nerve impulse “blocker” that attaches to nerve endings and prevents the release of chemical transmitters that activate muscles. If the message is blocked, the muscle doesn’t spasm. It is administered by injection directly into the affected muscles and once the muscle starts to relax (about three days after), it is slowly stretched as far as possible (depending on pain and resistance) and the limb is wrapped in a well-padded plaster cast for three to five days for prolonged stretching. The cast is then removed so the skin can be checked for pressure concerns.

‘The muscle is stretched further and another cast is applied in a more stretched position and kept on for another three to five days. The process is repeated until full mobility is achieved or a plateau reached. Nicholas had one set of injections in his right arm and right calf, followed by two sets of serial casts, and the results achieved played an important role on his road to recovery. Nicholas’s rehabilitation team is planning another round of Botox® treatment since his mobility has been vastly improved, and so has his quality of life.’