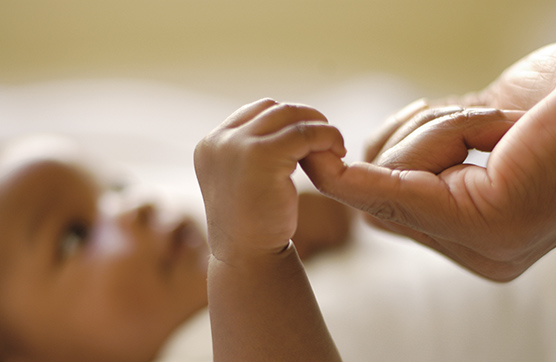 Welcoming a newborn baby into the world is often described as one of life’s greatest blessings. But with this bundle of joy comes new-parent jitters especially when dealing with newborn reflexes. Some are spontaneous movements that occur as part of a baby’s normal activity while others are responses to certain actions.
‘Because newborn babies have limited control over their bodies, they are equipped with temporary survival skills in the form of primitive reflexes. If your newborn exhibits these reflexes, it’s an indication that they are doing just fine,’ says Dr Dewald Buitendag, paediatrician at Life Fourways Hospital. ‘These will disappear in a few months as their bodies develop and adjust.’ The following are some common newborn reflexes.

The startle or Moro reflex is a regularly seen primitive reflex in newborns. Paediatricians often test this during examination. It usually occurs in response to a loud noise, a sudden movement or the sensation of falling when a baby is put down in a bassinet without enough support. The reflex consists of their body tightening, flinging their arms up and out, opening their usually clenched fists, drawing up their knees and then bringing arms and re-clenched fists close to their body as if giving themselves a hug. Babies may also cry a little.
It is a normal newborn reflex and parents shouldn’t be concerned. This is a remnant of human evolution, when the action assisted a baby clinging to their mother while being carried around all day. If they lost balance, the reflex caused him or her to embrace their mother and regain hold on her body. This reflex disappears by about two to three months of age.

When you stroke the side of your baby’s cheek with your finger or breast, they will turn their head to that side, open their mouth and begin to make sucking movements. This is the rooting reflex. It disappears at about four months.

When you stroke the palm of your baby’s hand he or she will immediately grab your finger and hold on tight. This reflex is also a remainder of evolution when we had to hang on tight to our mother’s backs. These days, the grasp reflex teaches infants how to use their hands to hold things, a precursor to feeding ourselves. This reflex disappears gradually, beginning in about the third month.

It’s a life saver, really. This aids your baby in not choking when they first start eating solid food. It’s demonstrated when you touch the tip of your baby’s tongue with a baby spoon and they push it back out. The tongue thrust reflex disappears between four and six months of age – one of the reasons why newborns don’t usually start solids before four months.

When your baby is lying on his or her back and you turn their head to the right, they will extend their arm and leg on the right side while flexing their arm and leg on the opposite side, assuming a fencing position. Your baby will do the same if you turn their head the opposite side. This reflex usually disappears at about six months.

If you’re holding your baby under their armpits with their feet touching the floor, it may appear as though they want to walk. This is due to the walking reflex. Your baby will place one foot in front of the other and start to ‘walk’ in place. This reflex disappears at about two months.